Beware! Bitcoin Evolution is most probably a scam system! Your investment may be at risk.

Тhe websites of cypto robots are usually absurd and replete with staggering statements about all the opportunities that await their future clients, as well as testimonials from “ex-clients.” And Bitcoin Evolution does not differ from the pack. Going through the website we come across the standard trailer video where the crypto robots “offer” is presented. In most cases, if not all, we are told that the team behind the project has been developing a cutting-edge trading software that’ll most likely make you rich with incredible speed. With Bitcoin Evolution we even see a box in the top right corner of the website which continues to show different supposed clients of the robot and their impressive “profits.” All this surely sounds for newbie traders very enticing. Especially for newbie traders who have had no experience with such scammers. We also see the logos of major media outlets such as CNN or Forbes which are there in order to further lend legitimacy to the crypto robot. However, putting aside everything spewed on the robots website, what do we actually know about Bitcoin Evolution?

No name, no address, no country of origin

Despite our thorough research, we did not find any information on the website regarding the registered address, the supposed company behind the operation, nor even the country of origin. As a matter of fact Bitcoin Evolution turns out to be pretty much the same website as Bitcoin Revolution and Bitcoin Investor with simply a different name. Scammers often choose to mix up websites in order to fool scam reviewers.

The only relevant search results for “Bitcoin Evolution” have the word scam written all over them. There is frightfully little information regarding the crypto robot on the web, as a matter of fact, the only mention of the company is in scam-exposing reviews or obvious fake five-star reviews. Furthermore, even though the logos of the media outlets are shown on the website, the crypto robot is not endorsed by any of them. This strongly inclines us to believe that the crypto robot is part of a popular scam in the forex trading world.

Redirects you to a forex brokerage

Precisely such websites, promising riches and profits through crypto trading, mislead traders into registering and carelessly giving away their address, phone number and email. Minutes later, that same personal data is sent to brokers and the registered traders begin getting phone calls from unregulated forex brokers like MDS LLC or DXTMarkets urging them to invest. The crypto robots receive a commission for every trader that invest with the brokerages. After registering with Bitcoin Evolution we are redirected to the forex brokerage Prestige Financial Markets which is owned by AllProTech OÜ – a company based in Tallinn, Estonia – and is not subject to any sort of regulatory oversight. You can see this from the screenshot below: 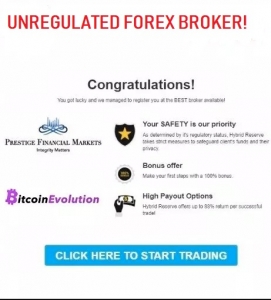 Scammers often choose to mix up websites in order to keep the scam going, unabridged by scam-exposing reviews. While reviewing the crypto robot we could easily see that its website is pretty much the same as that of other crypto robots which we have reviewed – Bitcoin Trader and Bitcoin Secret . This is what is known as “serial scamming” where the same people operate numerous websites which all offer the same product – nothing besides a link to an unregulated forex brokerage, as was shown above. You can clearly see from the screenshot below that the websites of Bitcoin Evolution, Bitcoin Trader and Bitcoin Secret are pretty much the same:

One of the biggest problems with crypto robots such as Bitcoin Evolution is the lack of assurance for results which is tightly intertwined with the lack of credibility. Credible Social trading platforms such as eToro or Zulutrade allow you to search through the profiles of different traders, taking notice of their track-record in trading, whether losses or winnings are the majority. Such transparency adds significant assurance and partially, if not fully, removes risk. It also extends credibility to the person offering a service. Furthermore, it gives you assurance that other people are risking their money with the trader as well. Where as with websites such as Bitcoin Evolution you are simply taking a leap of faith.

We should also point out that such operations are not overseen by any relevant authority, although that should go without saying. The people operating Bitcoin Evolution are not bound by any government regulator and potential clients have no one to turn to in case they have legitimate grievances.

Last, but not least – the mere way in which such operations seek funding should raise red flags. If Bitcoin Evolution did have anything of value, they would have found alternative ways of financing, instead of relying on cheap traffic through a cheesy, badly-done commercial about itself. They can apply for a credit at the bank, or another option utilized by today’s crypto companies is raising money through crowd-funding. However, all these options require something Bitcoin Evolution desperately lacks – legitimacy.

All in all, Bitcoin Evolution comes across as a standard scam operation – the likes of which we have seen a lot – and we advise those interested to stay away.

BTC Millionaires Still on a Roll Despite Volatility

Invest International review – 5 things you should know about invest.international

1Bitcoin Group review – 5 things you should know about 1bitcoingroup.com

Sunpor Group Limited review – 5 things you should know about sunporgroup.com

Marketbull.co.uk review – 5 things you should know about Market Bull

CTL Markets review – 5 things you should know about ctlmarkets.com

US Resident Charged by SEC for Operating $110 Million Ponzi Scheme

Advantiumlimited.com review – 5 things you should know about Advantium Limited

Manea Petrica: I am cheated by two brokers Constantin Ursu and Dumitru Lung ..