The CFD brokerage OctaFX has been granted a license by the prestigious Cyprus Commodities and Exchange Commission and is about to begin operations in the European Union. It will target traders through the new domain www.octafx.eu which is still under construction. 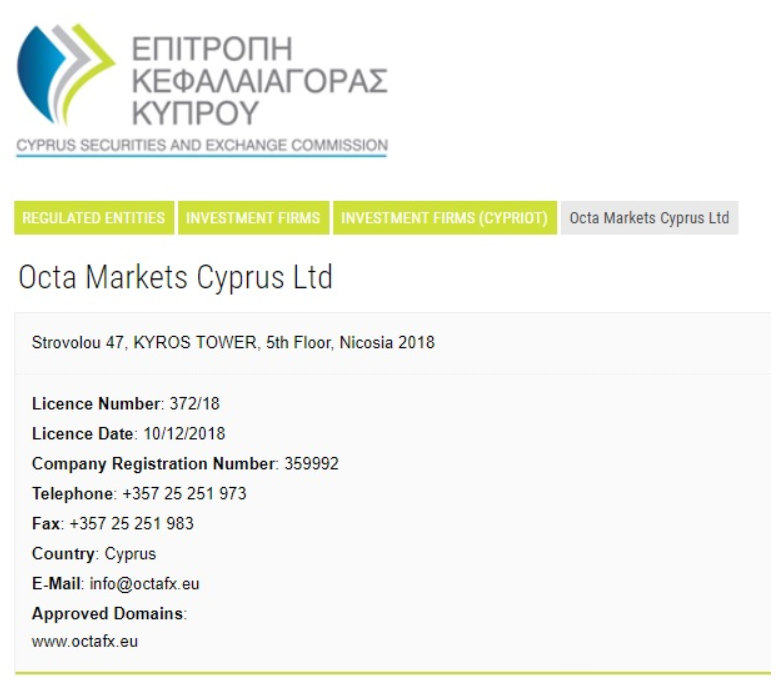 Although the brokerage used to do business in the UK, before voluntarily revoking its FCA license in April 2017, it has now dismissed launching new operations on British soil and instead opted for EU-member Cyprus. The move is partly influenced by the uncertainty caused by Brexit, as well the prospect of targeting EU clients.

This move comes in the wake of many Forex brokerages choosing to do the same in order to be able to access the European market which is even more strictly regulated after the new regulatory framework of last year. Most brokerages will get licensed in Cyprus or Malta and it still remains unknown whether UK brokerages will continue to provide services in the EU.

Cyprus has become a Forex stronghold due to it’s well-thought out regulatory framework, business-friendly taxes and well-developed technology sector. It’s main financial regulator – CySEC – is among the most prestigious regulatory agencies in Europe and has gained a reputation throughout Forex for its iron-clad guarantee for the safety of the client’s funds.

The Central Bank of India clarifies crypto has not been banned

Тhe Reserve Bank of India has posted a

The Central Bank of India clarifies crypto has not been banned

GFX Securities Review – 5 things you should know about Gfxsecurities.com

Morgan Trust review – 5 things you should know about morgantrust.eu

TCO Trade review – 5 things you should know about Tcotrade.com

AT Markets Review – 5 things you should know about At-markets.com

BTS Markets review – 5 things you should know about btsmarkets.com

UK scam broker falls on the radar of the FCA

EuropeFX: Dear Gerald Gildea, We are sorry to hear your experience wit ..

Wisernow: Another scammer to target Australians because the Commonweal ..

Mitras Suwarnov: That's really rofl, but I even can explain why Russian Centr ..