Beware! Zbest Trading is an offshore broker! Your investment may be at risk.

Zbest Trading claims to be headquartered in London and even pretends to be regulated, but that’s a blatant lie. In fact, it’s a shady brokerage acting suspiciously that may as well be a scam scheme disguised as a Forex brokerage. Find out why in the full Zbest Trading review. 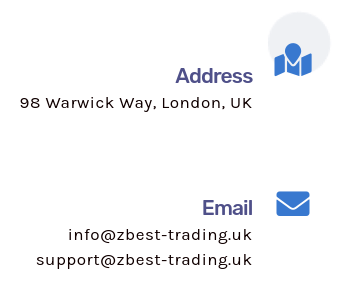 As mentioned, Zbest Trading claims to be a UK legit broker, but it took us no longer than a minute to disprove it. As seen from the screenshot below, the domain name isn’t associated with licensed companies, meaning that Zbest Trading is an unregulated brokerage creating a false sense of security by pretending to be authorised. That being so, we can only conclude that your funds will be in danger if you deposit, and we’ll now explain why.

Dealing with entities like Zbest Trading is dangerous as the absence of regulation implies that they are not monitored or controlled while carrying out their business. In such a case, they can misuse or outright misappropriate your money, and there will be literally no authority to prevent this from happening. In contrast, regulated brokers holding trustworthy licenses are forced by regulators to follow specific procedures that guarantee that you won’t get scammed by an authorised company.

For example, companies licensed by CySEC in Cyprus or FCA in Britain should store deposits in segregated bank accounts, separated from their own, which makes misappropriation impossible and help prevent fraud. Above all, though, if a brokerage goes under, people won’t lose their money as it’s kept segregated, and debt collectors can’t claim the funds. Moreover, the European Forex licensees are covered by deposit insurance funds that further secure deposits- CySEC brokers’ clients can claim up to €20 000 in compensation while the British guarantees are even up to £85 000 per person. Well, Zbest Trading can’t offer anything similar; even more so, it may knowingly put your money at risk or straight away steal it.

Another crucial feature worth noting is that the absence of regulation allows the people running the brokerage to remain anonymous. To put it another way, if you deposit with Zbest Trading, you’ll send money to individuals with undisclosed identities that will handle the funds while bearing no responsibility for their actions. Needless to say, it’s not a good idea to deposit with the brokerage reviewed. If it were trustworthy, it would get a license to prove it.

Zbest Trading’s software is nothing special- it’s pretty looking Webtrader but can’t offer any advantages over MetaTrader4 or MetaTrader5, for example. We mentioned the latter two for a reason- both are market leaders featuring powerful trading tools, including Expert Advisors and automated trading- Zbest Trading can’t even offer reliable indicators.

The platform revealed that the trading costs are tolerable- the EUR/USD spread is floating around 1.5 pips most of the time ($15 per lot traded, which is comparable with the industry standard of $10). Still, Zbest Trading is still shady and unregulated, so the seemingly favourable conditions do not in any way make it any better. Not to mention that Webtraders like the one seen below may as well be prone to fraud and price manipulation.

As for leverage, it varies between 1:1 and 1:1000, so Zbest Trading may as well be too risky for some traders. Moreover, the British regulator FCA prohibited ratios higher than 1:30 a while ago, so the leverage offered itself proves that Zbest Trading isn’t legit. Avoid!

The minimum deposit is $250 via Credit/Debit cards only, which is somewhat positive because people at least have the chance to dispute the transaction for up to 540 days and possibly get a refund. However, Zbest Trading is shady and unregulated, so it’s recommended not to deposit even a cent there.

As for withdrawals and fees, there is nothing as the brokerage doesn’t reveal anything about its services within the Terms document, except for the claim that it collects fees but fails to specify anything further. The clause you see below indicates that the brokerage may anytime soon inform you that you need to pay some unreasonable unspecified fees.

Zbest Trading is shady and unregulated, so it’s reasonable to be labelled a suspected scam. That’s why we’ll now describe how Forex fraud usually happens.

Scammers will try taking you for a ride in several ways, but basically, each scam is a repetitive process that doesn’t differ much from scheme to scheme. In general, scammers promise big and eventually deliver absolutely nothing, selling you fake goods, fictitious services and opportunities that sound too good to be true. They create a false sense of security and hope while aiming to steal as much as possible from their victims, who falsely believe that they are trading with a decent brokerage making money for them.

When scammers get hold of your contact numbers, they’ll ring you at once, promising to make you rich if you start investing with them. To gain confidence, those criminals usually pretend to work for governments, financial authorities, banks, multinational companies etc. Scammers will be confident in what they are saying, and if you don’t recognise the warning signs, you may end up depositing. However, just then, the Forex fraud actually begins. Once they have your money, the cons will distort prices and forge fake reports to make you believe that you are on the winning side while at the same time urging you to invest even more money in the scheme.

Gradually, the fraudsters will ask you to increase the size of your deposit and will make up stories claiming that you need to fund your account for whatever reasons. Sooner or later, you’ll get determined to withdraw your money, and then scammers will ask you to deposit again because, according to their words, there are taxes and fees that you should pay. At this point, you’ll probably realise that there is something wrong, and when the scam becomes too apparent, the fraudsters will simply cut the communication and disappear. Later, the whole website will be brought down, replaced with a new one so that the scammers can carry on with their criminal activities.

It would be best if you first call your bank and ask them for instructions and deactivate your card to avoid getting exposed to additional risks, as the scammers may as well have obtained your details.

Then, call the police, inform the financial authorities, file complaints and don’t forget to spread the word online so that other people can find out about the fraudulent scheme. Still, it’s crucial not to rush trying to reclaim your funds as numerous scams are disguised as chargeback agencies set up to double-scam victims.

Finally, we know it’s an awful experience to get scammed, but please share your story to help protect others!

BTC: 99% of its Supply is Currently in Profit

LTM Trade review – 5 things you should know about ltmtrade.com

Fenix Securities review – 5 things you should know about fenixsecurities.site

Ciizurn Global Limited review – 5 things you should know about ciizurnfx.com

Swiss Capital Bank review – 5 things you should know about swisscbank.com

Unicorn Forex review – 5 things you should know about unicornfxlive.com

IGC Markets review – 5 things you should know about igcmarkets.com

ImperialFunding.org.uk review – 5 things you should know about Imperial Funding

HND Global review – 5 things you should know about hnd-global.com