Beware! CoinsBanking is an offshore broker! Your investment may be at risk.

CoinsBanking is allegedly operated by experienced traders and technology experts who offer modern web-based brokerage services facilitating online trades in Europe, the Middle East, and other parts of the world, too. In other words, the brokerage needs an EU license to call itself legit. A spoiler-it has none, and we firmly believe that it’s just another fraudulent scheme. Find out the rest of the details you need to know about this dubious scheme in the full CoinsBanking review.

CoinsBanking REGULATION AND SAFETY OF FUNDS

CoinsBanking is introduced as a brand of Coinswitch LTD– a company allegedly registered in the Commonwealth of Dominica. Well, we could find no such entity, but we are not at the least surprised because the country mentioned is a shady tax haven where you can register a totally anonymous International Business Company (IBC). Simply put, it’s unknown who operates CoinsBanking and what these people actually are up to. Of course, it doesn’t take much to realise that the broker in question is most probably a scam.

What’s more, FSU- the financial regulator in Dominica, doesn’t license or monitor brokers, so CoinsBanking cements itself as a totally anonymous IBC pretending to act as a brokerage. The absence of regulation doesn’t undeniably confirm that CoinsBanking is a scam, but if you look at the screenshot at the bottom of this section, you’ll see it falsely claiming to be governed by UK laws. Well, such a statement certainly proves that CoinsBanking is fraudulent because the British FCA does not regulate it. In fact, the broker misleads the customers, so clause 22.1 alone makes the whole Terms document a hoax. CoinsBanking is a scam!

CoinsBanking is too risky as it’s anonymous and unaccountable, but there is yet another reason that makes it particularly dangerous. Namely, when you deposit, your money goes offshore, where it literally disappear without a trace, leaving you with almost no chargeback options available. Certainly, if you deposit via Credit/Debit cards, you can always dispute the transaction, but the whole procedure will become much more complicated because your money left its country, meaning that international cooperation is needed to get a positive result.

That’s why it’s always better to stick with companies authorised by trustworthy financial regulators like CySEC (Cyprus) and FCA (Britain). Both mentioned force brokers to keep deposits segregated local banks, thus ensuring that clients won’t lose their capital if something wrong happens. The segregation improves transparency, speeds withdrawals up, makes chargebacks easier and generally helps prevent fraud. What’s more, the European FX companies are covered by deposit insurance funds laid down to compensate clients in case of unforeseen events- CySEC brokers’ clients can claim up to €20 000 per person, while the British guarantees are even up to £85 000.

Eventually, CoinsBanking is a scam disguised as an unregulated offshore brokerage, so you’ll lose money to fraud if you deposit. Beware!

CoinsBanking offers nothing short of revolutionary while speaking about its platform, but the truth is that the broker comes with a basic Webtrader that’s many miles behind MetaTrader 4 and MetaTrader 5. The latter two are industry leaders featuring advanced tools like Expert Advisors and many complex indicators. So, if we forget that CoinsBanking is just a scam, we would still strongly advise against trading with it solely because of its primitive Webtrader. At least the software doesn’t visually look so bad.

The trading costs revealed by the platform also doesn’t excite- 2 pips spread for EUR/USD, which is at least twice worse than usual. The industry standard is 1 pip or below, meaning that clients pay $10 or less per lot EUR/USD. Well, if you trade with CoinsBanking, you’d pay $20 precisely for the same service- a good reason to avoid it, regardless of everything else.

The Webtrader also reveal the risks- the leverage is 1:100 fixed, and traders can neither choose the ratio when opening an account nor change it afterwards. It’s a risky ratio that can cause heavy losses if not properly used, but most importantly, 1:100 is no longer allowed in the EU. So, the leverage offered itself proves that CoinsBanking fraudulently claims to be a broker legitimately operating in the Union. It’s a scam! 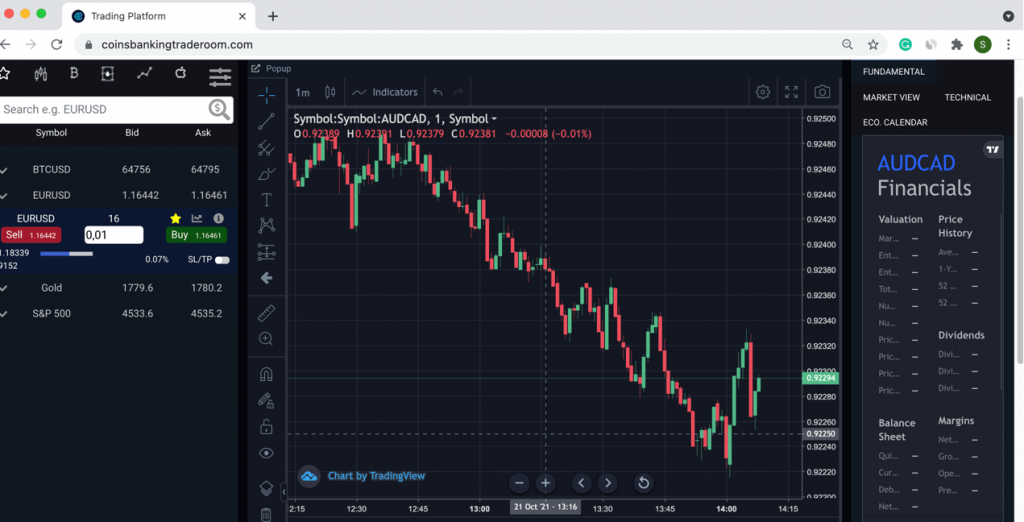 The minimum deposit is $250 via Credit/Debit cards, but each transaction goes through Shinepays– a fishy wallet known to serve the exposed Elcomercio24 and WinBitX, both of which we already reviewed. Well, that’s circumstantial evidence of a scam, but it still proves that CoinsBanking is worth being avoided. In fact, the Shinepays availability indicates that the broker may as well be a part of a larger scheme, which in turn suggests that these scammers are experienced and very dangerous indeed.

Discussing withdrawals and fees is generally worthless in this case, but allegedly, the minimum transaction should be no less than $500, free of charge. Such a condition is adverse as most of the regulated brokers impose no or minimum withdrawal requirements. In any case, though, CoinsBanking is a scam, so it won’t send any money to the unfortunate customers who deposited.

We exposed CoinsBanking as a scam, and now we’ll show you what con artists usually do while carrying out their crooked business.

So, when fraudsters get hold of your contact numbers, you’ll get a call, promised the moon and the stars if you deposit immediately. And to gain trust, those criminals will usually pretend to work for governments, financial authorities, banks, other reputable companies and so on. Scammers will be confident in what they say, so if you don’t see the warning signs, you may end up depositing fascinated by their fake commitment. However, the fraudulent game actually begins after you send the money. Once they have the desired deposit, the cons will distort prices and forge fake reports to make you believe you are on the winning side, manipulating you to start thinking big and consider more deposits.

Then, the fraudsters will continuously ask you to increase the size of the investment and invent stories to make you deposits over and over again. Sooner or later, though, you’ll get determined to withdraw some money, and then the scammers will ask you to deposit again because, according to their words, there are taxes and fees that you should pay. At this point, you’ll probably realise something wrong is going on, and when the scam becomes too apparent, the cons will simply stop answering your calls and e-mails.

It would be best if you first call your bank to inform it and then deactivate your card to avoid any additional risks, as the scammers may as well have obtained your details.

Then, call the police, inform the financial authorities, file complaints and don’t forget to spread the word online so that other people can find out about the particular scam, too. Still, it’s crucial not to rush trying to reclaim your funds as numerous scams are disguised as chargeback agencies set up to double-scam victims.

Finally, we know it’s an awful experience to get scammed, but please share your story to help protect others!

Atmos Market Review – 5 things you should know about atmostradefx.com

Trade Horizon review – 5 things you should know about tradehorizon.com

Verge Markets Review – 5 things you should know about vergemarkets.com

Try Win Traders review – 5 things you should know about trywintraders.com

Lsa Trading review – 5 things you should know about lsatrading.com

Biggest Gambling Ring in Vietnam Worth Billions Busted by Police

Trade Vision Group Review – 5 things you should know about tradevision-group.net

Leo Brokerage Review – 5 things you should know about leo-brokerage.com

DeltaStream.ltd review – 5 things you should know about deltastream

Unions Market Review – 5 things you should know about unionsmarket.group

Hong Kong Ruitong review – 5 things you should know about rtttrade.com

Super Capital Review – 5 things you should know about supercapitalfx.com

Semir: The criminals are not allowed to read this chat or point out ..

Cruzer: I have also been scammed out of millions in ZAR how can I ge ..

Michael: HuiDeli Global Limited Was contacted through Whats app By a ..